Some frustration from installing FreeBSD on a Foxconn A3550 with a Realtek 8168B/8111 card and Ubuntu saving my day (again).

After a pretty sad death of both harddisks in RAID1 setup on my old server that was sucking a lot of electricity and making pretty annoying level of noise for several years (don’t ask when the last backup was performed) I was obviously up to another setup. This time I decided to go for a ‘greenish’ setup without unnecessary redundancy and splitting the concerns of large storage and running all kinds of things like Apache, MySQL, etc for private projects data. 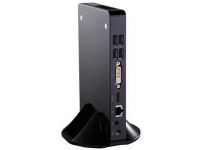 After some small research I settled down on Foxconn nT-A3550 E-350. Dropped some 4Gb of memory and 64 Gb SDD gave me a tiny silent box that can be used to exercise all kinds of things. There was only one small thing left… Installing an OS.
Somehow I had a FreeBSD as the first candidate when thinking of a server. Previous server had a rather old Ubuntu server version, but this time I was up to something new. Except… well, one by one.

My first idea was getting recent version of FreeBSD, which is at the time of writing was 9.0. Few minutes of download, dd’ing a spare USB stick and we’re done. Installation went smooth, although I’ve only realized later that it was due to the fact that 9.0 recognized the Intel wireless card in the little Foxconn and downloaded everything using wireless connection. The problem started when I’ve tried to setup wired connection (preferred for stability, as wireless may drop once in a while). Well, there was no luck for two sleepless nights and a lot of digesting of forums. I’ve tried many things and narrowed the problem down to the driver of the Realtek 8168B/8111 under FreeBSD. While it was recognized there was no luck in getting either DHCP acknowledgement or getting connection using static IP configuration. Symptoms: card fires up, link is detected, DCHP client tries to get IP, but does not “see” the DHCP offer from the router. Checking the logs of the router show that the offer is sent, but apparently never received/understood by the client. Apparently Realtek did release a driver version for FreeBSD 8.0 and some people claim that there was better support after 9.0 release this didn’t really help. I’ve tried the Realtek version, but it didn’t compile under 9.0 due to cleanup of the internal software interface. The version in 9.0 looked like a more advanced version apparently it didn’t work with my card. Bad luck…

Next trying FreeBSD 8.3 The idea was that the drivers are further developed since the 9.0 release. Well, I haven’t even got to the drivers. The Intel wireless card was not recognized and the wired Realtek still didn’t work with the same symptoms. That was it for FreeBSD.

And then Ubuntu (12.01 LTS server to be specific). Creating a bootable USB stick involved just another conversion step (from .iso to .img) as nicely described on the Ubuntu site and off we go. Guess what, the installation went smooth and all hardware detected at once. About 30 minutes later I had a fully functioning system with the software installed. So after all I am back to Ubuntu again.

Second though on FreeBSD. I may give it a chance later on when 9.1 comes out. Having manually built driver that relies on a (apparently deprecated) interface just asks for a trouble with the next update (which may be needed due to e.g. security reasons).

One thought on “FreeBSD vs Ubuntu server”