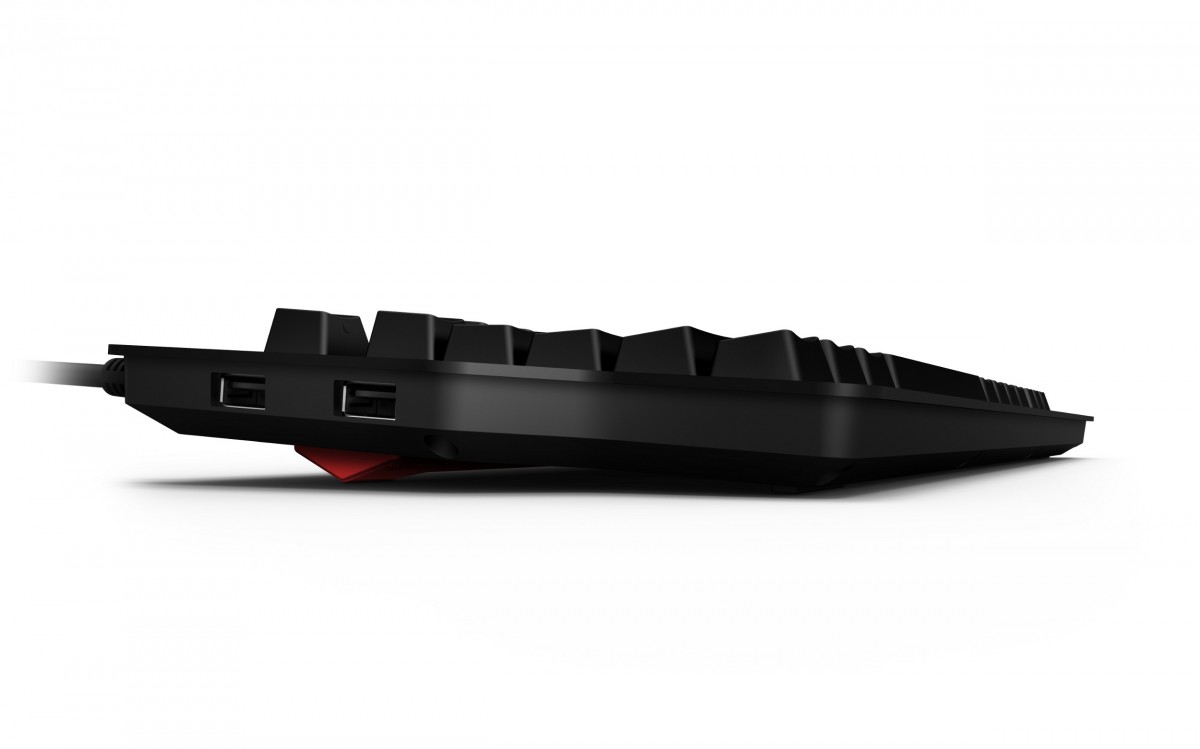 My journey into “different” keyboards started with some clunky Microsoft Natural Elite keyboard which I had to buy to get adjusted to the “curious” layout of the navigation keys at work way more than 10 years ago. When my (back then) girlfriend moved in I had to ditch that one as it apparently… was to noisy. I looked for some alternatives and after some time settled on Natural Ergonomic 4000 which apparently is not that bad choice, but…

To sketch another part of the equation, I tend to have minimal free space on my desk cluttering it with all kinds of things that never find a better place to gather dust than in front of my face to make sure that “one day it gets proper place”. In this sense having a bulky 4000 was already an overkill, although a justified one, especially since the (once silent) house was taken over by the horde (ok-ok, just two) of kids that apparently have a binary system of noise-silence meaning active-sleep (=don’t you dare to disturb) mode. The last one prohibited me from having anything else than a near-silent membrane keyboards for a while. Even now typing on a mechanical keyboard I expect my better half appearing any moment with the upsetting message that I am about to use my new toy for the last time at the dark part of the day. Anyway…

Last but not least I have a tendency to change devices and once in a while to use my old 10″ netbook with tiny keyboard for some “focused scratchpad work” and typing on that thing for more than half-an-hour gives me pain in fingers just by thinking about it. The undeniable advantage of the tiny form-factor is portability and in addition to that it is also the only Linux device I can program on now, so I need to live with it for some time.

So first of all I spend some time googling for best keyboards, differences between differently coloured switches, best known brands, etc. After all knowing that won’t end up with much less than a hundred EUR I didn’t want to pick “just something” and then buy what I like anyway (“been there done that”). Most of the reviews of mechanical keyboards are about gaming as apparently those things set the trend, but if there is one thing I am not interested in that is gaming. So gone all the flashy things, with the proper filtering I settled on “classics” in the form of Das Keyboard. Well-known for good quality keyboards and praised by the typists, the only two choices to be made in general are the type of switches (blue or brown for typing) and the form-factor. Trying to stick to the “silent” part I did not hesitate much regarding the choice of brown switches ( less “clicky noise”) and the smallish form-factor of 4C. Finally, when I also saw the WTF-effect blank 4C Ultimate I was sold (at least on paper).

Well, I was not literally sold when I saw the price, but then at certain point I just had another “wattaheck” moment and purchased the Das Keyboard 4C Ultimate. With the modern wonders of Internet purchasing I could pick it up next day (I could also let it be delivered, but I would hate to miss the delivery). So there it was, a small but heavy white box with the nicely printed keyboard image on it.

Well, it starts with the feeling of how heavy Das Keyboard 4C Ultimate is. It does have some metal plate inside and it weights way more than you would expect having experienced only the “regular” office keyboards. When opening the box you see a… ruler. 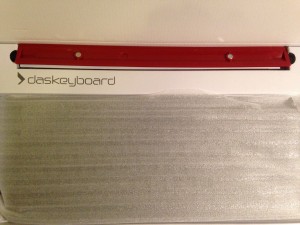 Yes, a ruler, with some magnets on the back that can stick to your keyboard and be used as a raiser. Not a very obvious design, but a functional one and just another “interesting detail”. But then, 140 EUR for a ruler… ehm, keyboard. OK. Attaching is not an issue obviously – just plug-in and type. Here the first point comes up. How good are you with adjusting to a a new keyboard and NOT looking at the keys. The point it… it is useless to look at the keys without any labels on them :). It is not an issue for a regular typing as I found except… entering non-trivial passwords :). That took quite some thinking and looking up of layout relative to the “marked” “F” and “J” keys that have some small tactile marks on them.

To be honest, I knew the Das Keyboard switched to a different switch manufacturer, but I didn’t expect to feel any difference. Well… it didn’t feel that nicely. Perhaps it was partly in my head, but the keypress was a bit longer that I would prefer and not really nicely weighted.

Another small point is that due to the “nice design form” the keyboard is a bit bulkier than it ought to be for the “small form factor” (s-called “tenkeyless”) keyboard it actually is. The extra bezel does not seem to be contributing anything useful to the whole design. Oh, yeah, and one small detail – the cord seem to be a rather disappointing “forgot to design” thingy. It is just a simple non-detachable (perhaps not the biggest point, but still) plain plastic-wrap cord. To be honest looks rather cheap especially compared with the rest of the “screaming design” package. Devil is in the detail…

But what became a real deal-breaker for me for this particular one was realising that unlike advertised on images on the website and on the box this was an ISO (European) model with the large “Enter” key, a smallish left “Shift” and “misplaced” (at least compared to expectations of my fingers) the “\|” key. When blind-typing on a keyboard without any labels this IS a very annoying feature. So after short period of trying I decided to give it back and re-think the whole thing.

The nice part of what I’ve experiences was the built-in USB hub (although some nag that it is USB 2.0 only), which saved me a port to connect a wired mouse to the notebook. Well, I wouldn’t say this is really worth the 50 EUR extra compared to some competition, but might be a handy one. 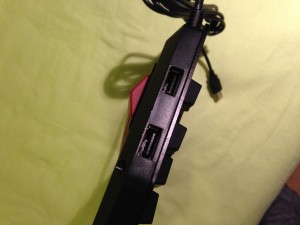 Finally, the keyboard does not really offer anything except for building up on the brand that used to provide preferred tools for professional typists, but now only providing “design keyboard” with less than top-of-the-list (at least for purists) components and very basic functionality (ok, it does fits “pure” and “classic” definitions perhaps). Note, that many reviews that are praising Das Keyboard still refer to the old Cherry MX-based models, and not the new Greentech-based ones.

Anyway, while waiting for the official return to be processed (took another day) I dug a bit further into alternatives for a small-factor mechanical keyboards this time paying attention to having genuine Cherry MX switches and a bit less focused on the “stealth” look of the keyboard.

While there are many alternatives that look pretty similar on photos and provide similar list of features, CoolerMaster seem to tick most of the boxes for a reasonable price and as a bonus it is a well-represented brand in Europe. With the price tag about 30% lower than Das Keyboard it does not come with the blank keys, but it does come with an impressive list of features next to being a simple brick-like (my favorite, I must admit) design and featuring the “proper” Cherry MX switches. Hmmm, tempting. This time picking up was not really an option, so I just made sure the listed model was “US” layout and the order was sent without much hesitation.

Next day to my big initial disappointment I have found a piece of paper in my mail meaning “missed delivery”, but luckily enough it was left at my neighbours. Wow, thanks for that! So I went to get “my box” and the first thing that came to my mind when I got it was… is it empty? The size and the weight didn’t really correspond that well after trying the Das Keyboard. Unpacking the box revealed the seemingly proper box and opening that, to my relief, revealed the properly laid out keyboard. OK, we’re in business now!

So first of all the CM QuickFire Rapid-I keyboard feels a lighter than the Das Keyboard “brick”, but it is also smaller in physical size, so that seems logical. While the box is rather “flashy”, the keyboard itself is not painted in “war colours” and unless backlight is on does not draw any extra attention. 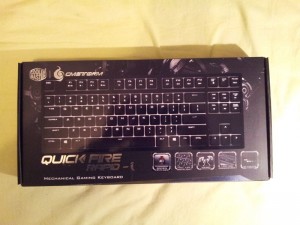 Inside of the box there is a… keyboard, the detachable cord and a key remover. The layout seem to be just what is needed in most situations including properly sized and positioned cursor and Ins/Del/Home/End/PgUp/PgDown combo. This is nice as does not require any adjustment with respect to a regular keyboard. There is no ruler :), but I kinda can live without it apparently. 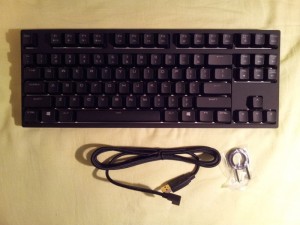 Under the keys there are (claimed) original Cherry MX Brown switches, which are very nice to type on without spreading too much noise into the nearby rooms. The backlight works as advertised with some curious options like highlighting the last pressed keys (leaving “disappearing traces”), although I wouldn’t know why to use except creating one-time-off “wow” effect (and help others guess your passwords :)). There are shortcuts for play/pause/ff/volume which seem to work without any additional software/drivers install on my Mac. Wow. I like that. A small detail – the detachable cable is braided, which gives a bit of “premium” feel. 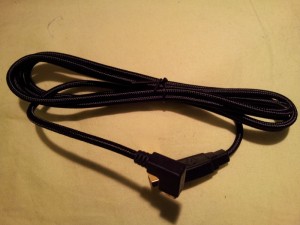 But what about typing? Well, that goes very well in my view. I truly enjoy typing this article :). The keys are covered with rubber, which will eventually be covered with finger oil of course, but it feels so much better than just plastic at least in the beginning ;). And, by the way, washing your hands will not only help prolonging the rubberised feel longer but also better for your hygiene :).

What I also like is a small-ish print on the keys that is not standing too much, with a distinctive “square” font (perhaps the only thing remotely reminding of the gaming nature of the keyboard)?

The size of the keyboard is just a key-width more than the 13″ MacBook Pro, so having it next to a notebook is not dwarfing the notebook, but looks like a nice addition.

The only downside found so far is that the square design is getting in your palms eventually :), so a palm-rest (well, eating up space again) or “floating” your hands above the keyboard is a new thing/habit I will be developing coming time.

So here is a list of things to be considered if you buy your first mechanical keyboard besides the switches, amount of money, etc:

To conclude – it is a big fun-factor in a small form-factor!

Well, looking further another option that I may consider in the future is a combination of the ergonomic and a mechanical keyboard, but that is a different terrain all-together asking for another price and mostly fulfilled by niche companies. A quick research brings up, for example, Matias Ergo Pro, although it does not feature the Cherry switches, may provide additional level of comfort. Unfortunately it is not sold in The Netherlands, so an oversea/channel delivery would be required, and since I would really like to give it a try first this seem to be a whole different story.